LYNN -- Cardinal Seán P. O'Malley joined Gov. Charlie Baker and other state officials on March 12 for a tour of St. Mary School and a roundtable discussion about successful in-person learning during the coronavirus pandemic.

Along with other Catholic schools in the archdiocese, St. Mary's School has been open for live instruction since the 2020-2021 academic year began, with safety protocols in place to prevent the spread of the virus. Although a remote option has been available for students who want or need it, over 90 percent of St. Mary's students chose to return to the classroom.

Jamie Gigliotti, executive director of external affairs at St. Mary's, said that when the year began, Lynn was considered a red zone, meaning it had a high count of coronavirus cases; but they referred to St. Mary's as "a green oasis," where the coronavirus count remained low.

Although their online learning platform worked well, "really nothing can compare to that in-person learning experience, and we wanted to make sure we had that opportunity for our students," Gigliotti said March 15.

The cardinal and the governor were accompanied on their visit by Lt. Gov. Karyn Polito, Massachusetts Secretary of Education James Peyser, and the archdiocese's Superintendent of Schools Thomas Carroll. St. Mary's also invited representatives from four other Catholic schools to come and greet the cardinal.

After touring the school's new STEM building and visiting freshman and AP biology classes, they participated in a live streamed roundtable discussion with Head of School Dr. John Dolan and Board Chair William Mosakowski.

Cardinal O'Malley said it was "a great honor" to have the governor, lieutenant governor, and secretary of education there.

"We are your partners in trying to serve the people of the commonwealth, and so grateful for the leadership that you have given us," he told them.

Five students from St. Mary's participated in the discussion: senior Ava Benzan, junior Madison Spencer, sophomore Orvis Njika, freshman Joseph Goyette, and sixth-grader Ruthshell Cazeau. Each student had the chance to introduce themselves and talk about their experience this year.

"The past 365 days have been a learning experience. Getting to come to school every day has been such a blessing in every way possible," Madison Spencer said.

The visit came as Gov. Baker has been pushing for public schools to reopen for in-person learning, and has often pointed to the Catholic schools as evidence that the new health and safety protocols can be successfully implemented and students can be protected from the virus while attending school in person.

Speaking to the media following the roundtable discussion, Gov. Baker said, "The work that's been done by so many of the schools -- public, private and parochial -- that have been open is a real sort of laboratory for everybody else. And I certainly hope that many of the lessons that have been learned over the course of the first two-thirds of this school year can be incorporated by others as well."

After the meeting, Cardinal O'Malley addressed the student body via webinar. He expressed gratitude for the faculty, staff, board and trustees of the school, and he wished the football team luck in their upcoming game.

The cardinal also shared a few stories -- some from his own experience as a teacher and advocate, and some he heard from others -- illustrating the important role of Catholic schools.

He quoted a letter written by a concentration camp survivor, Haim Ginott, to teachers, describing how he witnessed well-educated people -- doctors, engineers, soldiers -- using their knowledge and skills in the service of evil.

"As much as we want our students to be people who are knowledgeable," Cardinal O'Malley said, "we also need for them to be -- for you to be -- virtuous people."

Haim Ginott urged teachers to "teach your students how to be human."

"This is what Catholic education is about, teaching us how to be human, and to know that being human means being made in the image and likeness of God and having that connection with each other," Cardinal O'Malley said.

He encouraged the students and staff of St. Mary School to "Keep on doing the good job that you're doing."

"We're proud to be a Catholic school and to be an example of how schools can open in person safely and successfully, and we continue to count our blessings every day," Gigliotti said. 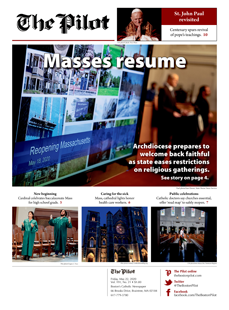