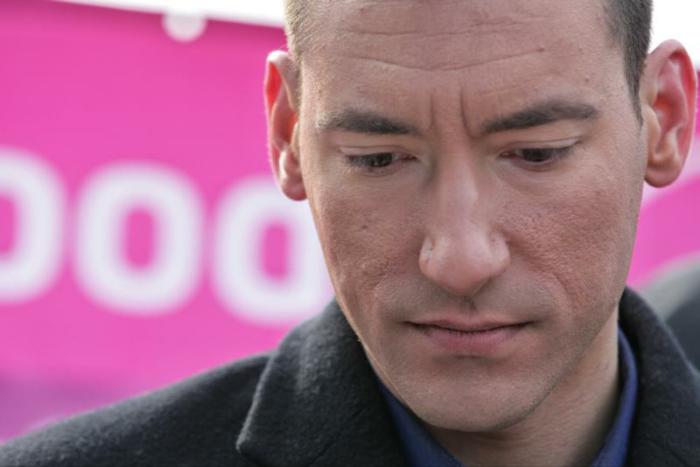 David Daleiden, founder of the Center for Medical Progress, pauses during a prayer and protest rally outside of the new Planned Parenthood building in Washington Jan. 21, 2016. Planned Parenthood was awarded as much as $2.2 million in damages Nov. 15, 2019, after a federal jury in San Francisco ruled that Daleiden had broken federal and state laws when he secretly recorded workers for the organization. (CNS photo/Lisa Johnston, St. Louis Review)

SAN FRANCISCO (CNS) -- After a 10-member jury handed down a nearly $2.3 million judgment against David Daleiden late Nov. 15, a Chicago-based pro-life law firm said it would appeal the judgment on behalf of Daleiden and his organization, the Center for Medical Progress.

Planned Parenthood and 10 of its abortion affiliates brought the lawsuit in 2016 over undercover investigative videos filmed in 2015 by Daleiden and his colleague Sandra Merritt that showed Planned Parenthood officials discussing fees related to fetal tissue. The two posed as representatives of a mythical fetal tissue procurement firm.

The monetary damages the jury awarded to Planned Parenthood included $870,000 in punitive damages that Daleiden, his associates and the Center for Medical Progress will pay, along with another $459,361 in compensatory damages they must pay to cover the costs of increased security measures the abortion organization said it had to take because of Daleiden.

Because the verdict was handed down under the federal Racketeer Influenced and Corrupt Organizations law, or RICO, the compensatory damages will be tripled, bringing the amount of all damages to $2,278,083.

"We intend to seek vindication for David on appeal. His investigation into criminal activity by America's largest abortion provider utilized standard investigative journalism techniques, those applied regularly by news outlets across the country," Breen added.

Planned Parenthood accused Daleiden and his colleagues of among other things fraud, illegal wiretapping, invasion of privacy and trespassing.

The organization said monies it received for fetal tissue were standard reimbursement fees charged to researchers and that any allegations it profited "in any way from tissue donation is not true." But in the fall of 2015, Cecile Richards, then CEO of Planned Parenthood, announced the organization would no longer accept the reimbursements.

"Rather than face up to its heinous doings, Planned Parenthood chose to persecute the person who exposed it," Breen added in a statement. "I am fully confident that when this case has run its course, justice will prevail, and David will be vindicated."

In a statement, Planned Parenthood's acting president and CEO, Alexis McGill Johnson, said the organization was "thrilled with today's verdict."

"The jury recognized today that those behind the (undercover video) campaign broke the law in order to advance their goals of banning safe, legal abortion in this country, and to prevent Planned Parenthood from serving the patients who depend on us," she said.

"Justice was not done today in San Francisco," Daleiden said in a statement.

News reports said that in Orrick's ground rules to the jury at the start of the trial, he excluded "going into the truth of abortion procedures" and said the case was not "not about the truth of whether plaintiffs profited from the sale of fetal tissue or otherwise violated the law in securing tissue for those programs."

Critics of the judge questioned why he "allowed Planned Parenthood's lawyers to play recordings of the undercover videos in question, but would not allow the same for the defense" during the trial, as The Federalist online magazine reported.

He said the jury's verdict "is a dangerous precedent for citizen journalism and First Amendment civil rights across the country, sending a message that speaking truth and facts to criticize the powerful is no longer protected by our institutions."

A number of pro-life leaders around the country decried the verdict against Daleiden, including the president of the Susan B. Anthony List, Marjorie Dannenfelser.

She called it a "profoundly unjust verdict" in "a trial stacked from day one by a pro-abortion activist judge."

She and Breen noted that what the videos exposed prompted the U.S. Congress to issue criminal referrals for Planned Parenthood, and numerous states and elected officials have moved to strip it of funding.

Attorneys from the Thomas More Society are defending Daleiden in a California state criminal trial over the same video exposes.