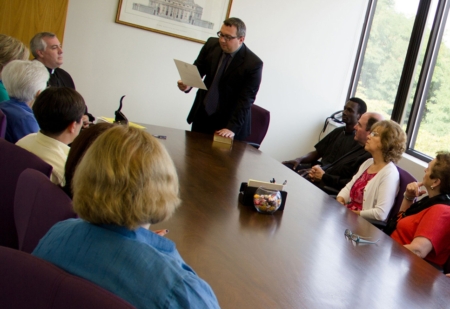 Metropolitan Tribunal staff and well-wishers gather in the offices of the tribunal to witness the swearing-in of Andrea Ponzone as a judge. Pilot photo/Christopher S. Pineo

BRAINTREE -- Judicial Vicar Father Mark O'Connell swore in a new judge to the Metropolitan Tribunal at the pastoral center in Braintree, Aug. 20, who will serve the court that functions on behalf of Cardinal Seán P. O'Malley in judicial matters.

With his parents video conferencing from his native Casale Monferrato in Piedmont, Italy and his hand on a Bible, Andrea Ponzone, 34, swore to uphold and maintain personal communion with the Catholic Church in his words and actions, to carry out the duties accorded to him with deference to the Church Universal and the local Church, and to hold fast to the faith while avoiding teachings opposed to it. He also professed loyalty to Church leaders and fealty to the Code of Canon Law.

"Andrea, on behalf of the cardinal, you are a judge." Father O'Connell said, as Ponzone officially became a judge at the tribunal, part of the backbone of the judicial system in the Church.

As a judge, his role differs greatly from what one might expect in a secular court. As opposed to a secular judge who acts as a kind of impartial buffer between prosecution and defense representatives in an "adversarial system," Ponzone will serve in an "inquisitorial system" where the court or a part of the court takes up an investigation of the facts of a case before it -- the work of the tribunal.

Through the tribunal, individuals in the Church can seek justice or vindicate their rights, while the local Church can determine legality or impose legal penalties under the judicial vicar on behalf of the cardinal. On matters of determining legality of operations or rules in the local Church, the cardinal can consult with staff of the tribunal and the judicial vicar as a kind of advisory body.

After the ceremony Father O'Connell explained that most titles of court officers coincide with their function, often named for that function. For example, he as judicial vicar on behalf of the cardinal had wielded the "vicarious" power of his office in the swearing-in ceremony.

Father O'Connell explained that the work of the tribunal can most easily be understood using the example of investigations into the validity of marriage -- the way in which laypersons most commonly experience the court.

Now as a judge, he will sit on a panel of three judges or a "college," with a single presiding judge, who make a ruling ultimately on the case. But if it will avoid impeding the pursuit of swift justice, one judge can make a decision, and five or more judges may hear cases deemed more important. Only a priest canon lawyer can serve as a single judge.

Laypersons seeking judgment act either as a petitioner, who requests the judgment of the court, or as a respondent, who literally responds to the court once notified of a request by the petitioner. Each of these has an advocate -- a petitioner advocate or a respondent advocate, a canon lawyer who represents them to the court before the college of judges.

In tribunal courts with notaries on staff, the notaries review written testimony and documents submitted by parties to assure their legal authenticity in court.

The entire process unfolds in five stages: introduction of a case, collection of testimonies, review of testimonies and discussion among court officials, decision of the judges, and an automatic appeal process.

Even understanding the words in the title of the court can help understand the overall role. The word "tribunal" comes from the word "tribune," a raised platform which holds the seat of a judge.

"I don't want people to associate the court with this image, because it makes it look scary," Father O'Connell said, as he pointed out a photograph in the office library of judges in traditional garb sitting at a tribune.

The word "metropolitan" references the power of the archbishop in a metropolitan area like Boston. The status gives Boston standing amongst the dioceses of the ecclesiastical province.

While the majority of cases handled by the Metropolitan Tribunal concern marriages, other matters handled by the office include trials for priests accused of abuse of office and investigating saint's causes.

"Currently there is an Opus Dei priest, Father Joseph Muzquiz, who is being investigated for sainthood, and that is being done out of this tribunal," Father O'Connell said.

He said the current code dictates that a saint's cause be investigated in the diocese where they are buried.

In matters of criminal law the tribunal calls upon the promoter of justice to investigate canon-law offenses and present the case of the archdiocese -- similar to the function of a district attorney in secular court -- against the accused.

"Every society has law, the Church has law, has had it from the beginning. Canon Law is based originally on Roman Law, Jewish Law, and the sayings and acts of Jesus," Father O'Connell said.

Though the Code of Canon Law reached its current form in 1983, it was formally codified comprehensively for the first time in 1917 after a 15-year process. However, the history of the universal law goes back more than 1,000 years in the Church.

Before the law finally became codified in 1917 under Pope Benedict XV, it was established and enforced over the centuries by popes and councils. The 1917 iteration received an update when Vatican Council II called for a new code.

In 1983, when Pope John Paul II updated the code to allow laypeople to serve in positions like the one taken up by Ponzone, a new career option opened up for laypeople in the Church.

For the tribunal in Boston, the expertise required and the length of time the career option has existed for laypeople limited the field of candidates for the job and stimulated the need for an international search to fill the position.

"It is not easy to find a canon lawyer," he said. 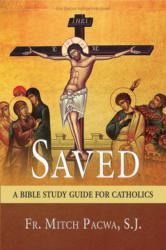 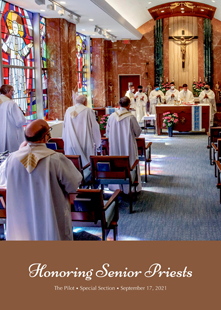 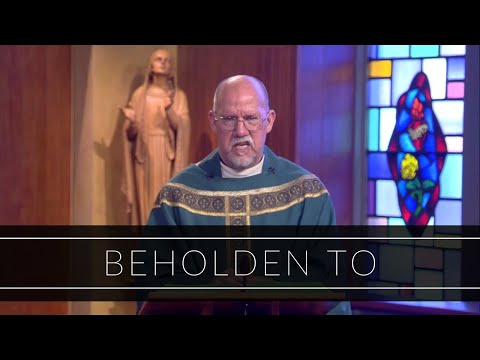