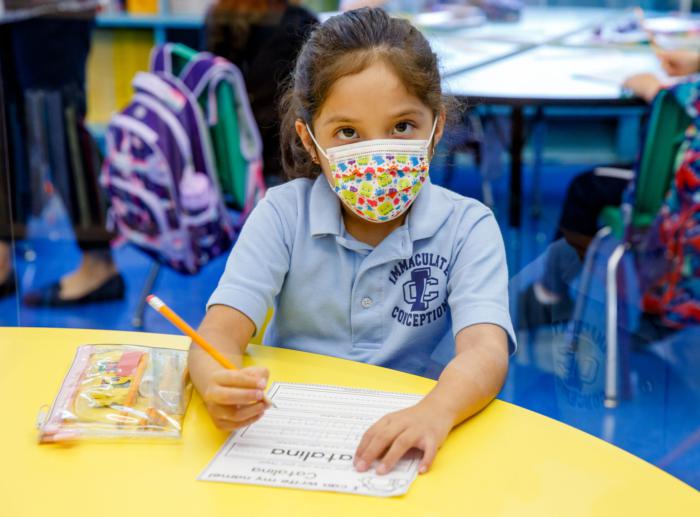 Kindergartener Maiya Damasceno attends the first day of 2020 classes at Immaculate Conception School in Revere. In a change of policy, the archdiocese will once again be requiring masks for all students, teachers and staff in archdiocesan Catholic schools until at least Oct. 1. Pilot photo/Gregory L. Tracy

BRAINTREE -- With just over a week to go before the start of classes in most Catholic schools, the Archdiocese of Boston's Catholic Schools Office (CSO) announced the implementation of a universal indoor masking requirement for the start of the school year.

In a notice released Aug. 25, the CSO said students, teachers, and staff aged five or older at archdiocesan schools will be required to wear masks inside, regardless of vaccination status.

"We support Gov. Charlie Baker's emphasis on ensuring a safe reopening of schools for all the children of the Commonwealth," the CSO said.

The decision to require masks, as the governor has proposed for public schools, was made in consultation with Cardinal Seán O'Malley and applies to the 69 Catholic schools run under the auspices of the Archdiocese of Boston.

Previously, the archdiocese had authorized schools to devise their own masking policies but said masks could not be required for vaccinated students or staff except in certain limited circumstances or where required by a local board of health.

Archdiocesan Superintendent Thomas Carroll summed up that stance in a July 29 Twitter post: "The Boston Archdiocese is allowing its Catholic schools to individually decide mask policies. Universally, however, no vaccinated person will have to wear a mask and we will not mandate vaccination. As always, we will continue to monitor the science and health data."

While some parents welcomed the loosened mask rules, others urged continued caution.

"Given that so many children aren't yet eligible for vaccinations, it seems like a no-brainer that we should require masks until that's an option," Michelle Miller, a mother whose two sons attend Blessed Sacrament School in Walpole, told The Boston Globe in an Aug. 19 article.

The archdiocese's new mask requirement will remain in effect until Oct. 1. At that time, they will reevaluate the policy, taking into consideration state and federal guidance, health data, and input from parents and schools. 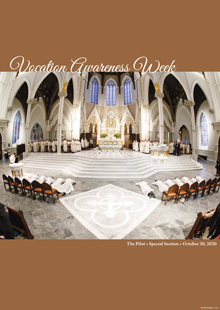