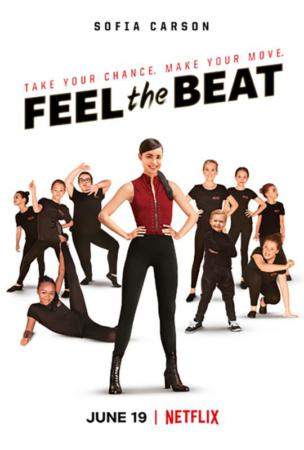 This is the TV poster for the Netflix series "Feel the Beat." (CNS photo/Netflix)

NEW YORK (CNS) -- The dance-themed blend of comedy and drama "Feel the Beat" is being marketed as fare appealing to all ages. And it carries a rating of TV-G -- general audience. Yet the feature-length film -- which is streaming now on Netflix -- is, in fact, marked by problematic content and messaging.

Elissa Down directs Michael Armbruster and Shawn Ku's script. Their story tracks the efforts of April (Sofia Carson), a 20-something hoofer whose dreams of Broadway have come to nothing, to coach a group of young dancers in her hometown of New Hope, Wisconsin, as they prepare for a competition.

April has returned to her roots at the invitation of her dad, Frank (Enrico Colantoni, "Just Shoot Me"), following a New York audition gone comically wrong. Having stolen a cab from an older woman, April belatedly discovered that the victim of her aggressiveness was Ruth Zimmer (Pamela MacDonald), the powerful producer of the show whose cast she hoped to join.

When April, by accident, subsequently knocked Ruth into the orchestra pit, breaking her leg, and a video of the incident went viral on the internet, her fate was sealed -- all the more so since she was already facing eviction from her Gotham apartment.

April herself is anything but pleased about her homecoming. But her former cheerleading coach Barb (Donna Lynne Champlin) is overjoyed to have her back.

Barb proposes that her ex-pupil drill the girls who attend her dance studio with the aim of winning the forthcoming contest. April accepts because, if her new charges succeed, it will impress one of the event's organizers and judges, another Broadway impresario whose eye April would like to catch, Wellington 'Welly' Wong (Rex Lee).

Meanwhile, April tries to mend fences with her former boyfriend, Nick (Wolfgang Novogratz), whom she callously dumped via text. With his parents deceased, Nick has commendably dedicated himself to raising his younger sisters, Sarah (Eva Hauge) and Michelle (Carina Battrick), the former of whom turns out to be the most talented of April's newfound proteges.

"Feel the Beat" contains some positive themes about accepting handicapped people and overcoming obstacles to achieve your goals. But it's also morally marred in a variety of ways.

The most distressing of the movie's defects is the mistreatment April dishes out to the girls she's training. In the manner of a Marine Corps drill instructor, she requires them to do 20 pushups for each minor transgression. She's also verbally abusive toward them. Nor, perplexingly, do any of the adults who observe April's excesses object to them.

Viewers will understand how humiliated April feels after her misadventures in New York and the public ignominy that resulted from them. Yet this can hardly justify her meanness toward the kids in her care.

Aesthetically, moreover, Carson's depiction of April makes her too much of a caricature to be relatable or likable from the audience's perspective. As Sarah succinctly puts it, April is "a selfish jerk."

This makes it hard to swallow that caring Nick should ever have been drawn to April in the first place. And, despite the partial conversion April eventually undergoes, the couple's predictable reconciliation similarly strains credulity.

Along with the occasionally off-color dialogue it contains, the screenplay is explicit about the fact that both Wong and April's friend Deco (Brandon Kyle Goodman) -- two characters who figure prominently in the narrative -- are gay. Accordingly, only those able to apply the principles of Catholic moral teaching in assessing their lifestyle should engage with this flawed film. 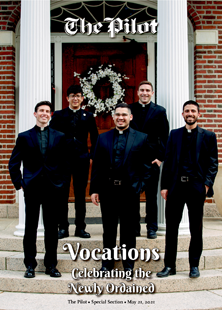