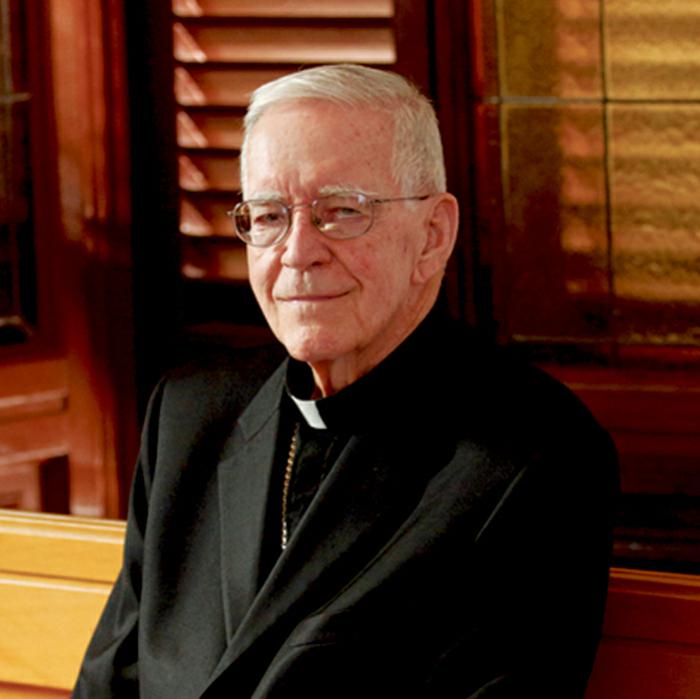 "Ecce sacerdos magnus" the initial words of a Latin motet frequently sung whenever a bishop entered a church; apply aptly to Bishop William J. McNaughton who died in Methuen on Feb. 3, 2020, truly "a great priest."

William John McNaughton was born in Lawrence on Dec. 7, 1926, one of the five children of the late William and Ruth (Howe) McNaughton. Raised in a strong Catholic family, he attended St. Augustine School and Central Catholic High, both in Lawrence.

He entered the Maryknoll Seminary following high school graduation and completed his philosophy and theology studies, receiving both a bachelor in sacred theology and a licentiate in religious education just prior to his ordination.

Fellow Lawrence native and Maryknoll Superior General, Bishop Raymond A. Lane ordained him to the priesthood at Maryknoll, N.Y., on June 13, 1953, he was sent for intensive language study in Korean at Yale University. Among the many people he met there were Oliver and Marjorie Barres, the parents of Bishop John O. Barres of Rockville Center. Bishop Barres noted on his Facebook tribute to Bishop McNaughton his kindness, gentleness and patience. He also attributed young Father McNaughton's interest in the reception into the Catholic Church of Bishop Barres's parents.

Father McNaughton arrived in Korea in August, 1954. Between 1954 and 1961, he served in parishes in the diocese of Cheongju: as an assistant in Chungbuk, then as pastor there and then as pastor in Naegok-dong. He was named vicar general of the diocese in 1959.

On June 6, 1961, Pope St. John XXIII named him Titular Bishop of Thurburbus Minus and Vicar Apostolic of the newly created Vicariate Apostolic of Inch'on. That city had become famous in US military history as the landing point of General Douglas MacArthur, "against all odds" at the beginning of the Korean conflict almost a decade prior to Bishop McNaughton's arrival.

He returned home to Lawrence for his episcopal ordination, which was at St. Mary Church there on Aug. 24, 1961. Richard Cardinal Cushing, assisted by Bishop John W. Comber, MM (a fellow Lawrence native and then the Superior General of Maryknoll) and Bishop Peter Canisius van Lierde, OSA, (a Belgian who was the vicar general of Vatican City) ordained him a bishop on that day. Bishop McNaughton joked that he had noted realized the reason the cardinal chose that date; since it was the feats of St. Bartholomew, he presumed it was that reason; he realized there was a "secondary" reason, it was the cardinal's 66th birthday!

In this case the cardinal gave a substantial monetary gift to the new bishop who returned the favor by using it to establish a diocesan seminary the following year, when the vicariate was made a diocese with Bishop McNaughton at its first bishop. He would be there much longer than MacArthur serving until April 2002.

Immediately, he set about the tasks facing any new bishop, but ones magnified by the missionary endeavor. Building on an established principle of forming and empowering the laity he started to increase parishes and educational opportunities. Slowly but surely the faith stared to take hold and the diocese grew in numbers and strong faith.

Between 1962 and 1965, Bishop McNaughton attended the four sessions of the Second Vatican Council. On Oct. 11, 2012, he was one of 15 bishops who was in Rome for the 50th anniversary of the Council; 55 others still alive then were unable to attend because of age. The bishop recalled the enthusiasm and excitement of the Council. At the end of the Council at 39, he had already been a bishop for four years -- one of the "junior" Council Fathers. He was the last surviving American Council Father and the last bishop appointed by Pope St. John XXIII.

In its history Maryknoll has had 23 bishops, of them only Bishop John Weitzel recently retired of Pago Pago, Samoa, survives; there are four bishops appointed by Pope St. John XXIII living, and there is one bishop appointed by Pope Pius XII still living.

He returned to Korea and began to implement the Conciliar agenda, again, with a specific emphasis on the role of the laity in carrying out the missionary activity of the Church.

He served in Inch'on for almost 42 years, when he retired in 2002, the diocese had almost 400,000 Catholics, about 10 percent of the total population; he had ordained one of his own priests as his coadjutor (designated successor); and in 2010 another of his priests was named auxiliary of the diocese and in 2016 became the third bishop.

When he returned to the United States, he first moved into the Maryknoll retirement Community in New York, but later returned to Methuen and lived there with his sister Ruth until his death.

During his retirement, he was still very active. Pastors in the Merrimack Region were happy when archdiocesan confirmation schedules were released and they saw Bishop McNaughton's name assigned to their parish. Likewise, he was a genuine spiritual father to the Poor Clare Nuns in Andover, where he frequently celebrated Sunday and daily Mass until just a few years ago.

Cardinal O'Malley hosted a special Mass and luncheon at Bethany Chapel in the Pastoral Center, Braintree, in August 2011 to celebrate Bishop McNaughton's Golden Jubilee as a bishop.

Merrimack Regional Bishop Robert Hennessey, himself a one-time missionary, much enjoyed Bishop McNaughton's company and advice; "I was always happy to have him come to events in the region; he was a supportive presence, especially for the priests of the Region."

Cardinal Seán P. O'Malley was the principal celebrant of Bishop McNaughton's Funeral Mass at St. Theresa of Lisieux Church, Methuen, on Feb. 11, 2020. St. Theresa is one of the patrons of the missions, that a bishop with incredible missionary zeal would have his Mass of Christian Burial celebrated in a church with her name was certainly fitting. Rockville Centre Bishop John Barres was among the concelebrants.