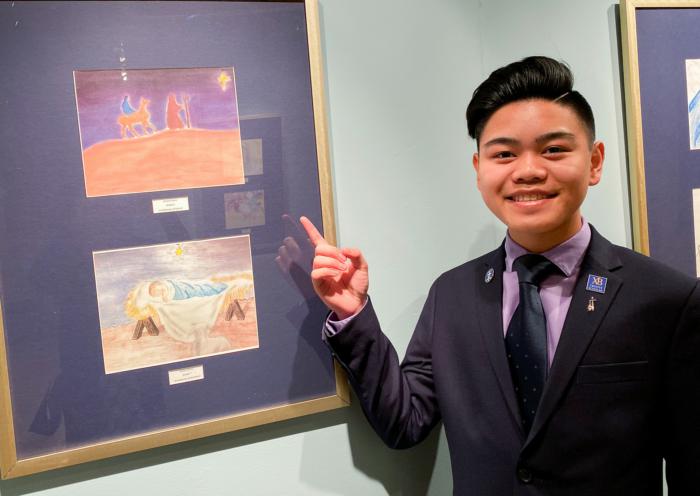 Joshua Cueco gestures to his winning entry in the Missionary Childhood Association's 2019 Christmas artwork contest on display at the Basilica of the National Shrine of the Immaculate Conception in Washington, D.C. Pilot photo/courtesy Maureen Heil, MCA

BRAINTREE -- Joshua "Josh" Cueco was in the eighth grade at St. Catherine School in Norwood when his art teacher told his class about the Missionary Childhood Association's annual Christmas artwork contest.

Inspired by a reference picture of the Magi, Josh decided to draw Mary and Joseph traveling by camel through the desert with the Star of Bethlehem above them. He used oil pastels to color the figures and chalk pastels to blend together the colors for the sky and sand.

Josh, who is now a freshman at Xaverian Brothers High School in Westwood, was honored as one of 24 national winners of the 2019 contest in a ceremony on Dec. 6 at the Basilica of the National Shrine of the Immaculate Conception in Washington, D.C.

"It's a really great way for kids to understand that they have God-given talents that can help the missions," Maureen Heil, director of programs and development for the Pontifical Mission Societies in the archdiocese, told the Pilot Dec. 27.

Heil explained that the annual art contest grew out of an older MCA tradition: at Christmastime, children who were members of MCA raised funds for the missions by selling envelope seals that depicted famous works of art. At one point, Heil said, someone suggested making the seals from children's artwork. MCA now makes contestants' artwork into cards and electronic greetings.

"They can evangelize in so many different ways, and art's just one of them," Heil said.

Submissions are sent through diocesan offices to the national MCA office in New York, which typically receives over 10,000 entries each year.

"We're blown away by the talent of these kids, of what they're putting forth on the theme of Christmas and what Christmas means to them. It's awesome to see," Heil said.

Two grand prize winners are chosen, and their entries are turned into the national MCA director's Christmas cards. Another 24 national winners have their submissions made into e-greetings. The winning entries are also displayed at the National Basilica of the Immaculate Conception during Advent.

Most dioceses, including the Archdiocese of Boston, turn local winners' art into Christmas cards. So, this year, cards depicting Josh's piece were sent to MCA donors and benefactors, and his family received a set of 100 cards on Mission Education Day in October.

The national winners and their families came from across the United States to be recognized at the award ceremony in Washington, D.C. on Dec. 6. It was Josh's second time visiting the basilica, having gone on a class trip to Washington, D.C. during the previous school year. He ran into some of the other contest winners again while sightseeing the day after the ceremony.

"Everyone there was excited to be there," Josh said.