During a reception before the meal and speaking program, music was provided by the Tempo International Steel Pan Band. The evening kicked off with a dance performance by the Singing Stars Youth Group of St. Andrew Parish in Worcester.

The master of ceremonies was Rashaun Martin, who received the Healy Award last year. Martin is a lifelong member of St. Katharine Drexel Parish and a Fourth Degree Knight of St. Peter Claver.

Martin noted that 2019 is the 400th anniversary of the arrival of enslaved Africans on American shores. To mark this occasion, the archdiocese's Black Catholic Choir performed spirituals, "through which the ancestors expressed their eternal hope and yearning for freedom," throughout the evening.

"Today the spirituals offer all of us hope in times of difficulty and uncertainty," Martin said.

The Healy Award is presented to practicing black Catholics who have shown effective leadership and service in the black Catholic community. It is named for the first black Catholic bishop in the United States.

The 2019 Bishop James Augustine Healy Award was presented to Marie Louise Greenidge, a community builder and education advocate from St. Mary Parish in Randolph. Greenidge grew up in an African-Caribbean family in Trinidad, West Indies. For the past 18 years, she has worked with minority student populations, and she is currently the director of advancement at St. John Paul II Catholic Academy in Dorchester.

Greenidge said that receiving the award made her think of her parents, who performed works of mercy "undramatically and normally," helping people without publicizing their good works. Greenidge said she did not see herself as different from anyone else at the dinner.

"This acknowledgement of my service is, I think, an acknowledgement of each one of us here. My prayer for you tonight is that you see the light, love and hope of our normal, everyday activities as manifesting God's unconditional love for us and each other," Greenidge said.

The 2019 Ruffin Award was presented to Deborah Kincade Rambo, the president and CEO of Catholic Charities in the Archdiocese of Boston. Rambo, who will be retiring from Catholic Charities at the end of the month, has worked for the organization for more than 15 years, serving as a clinical social worker and program director before becoming president in 2010.

The guest speaker at the dinner was Deacon Harold Burke-Sivers, an author and speaker from the diocese of Portland, Oregon. Burke-Sivers has hosted and appeared on many Catholic radio programs and is a host and co-host of several popular series on Eternal Word Television Network.

Burke-Sivers shared a story he heard recently from a priest who used to teach in a Catholic high school. As an experiment, the teacher wrote "I believe in God" on one side of the board and "I don't believe in God" on the other side, and told students to stand under the phrase that best represented their position. Most of the students stood under the statement, "I believe in God." Then the teacher erased the statements and wrote two new ones: "God loves me" and "God doesn't love me." Some students stood under the phrase "God doesn't love me," but most remained seated at their desks because they were unsure whether God loved them or not.

"But I can guarantee you this: our two honorees tonight have definitely shown the people that they have touched how much God loves them. It's their witness and example that we need to follow if we are to truly change this culture," Burke-Sivers said. 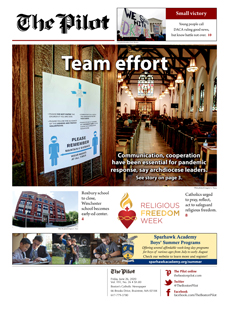