ALEXANDRIA, Va. (CNS) -- Just a few words in a letter of John Rolfe's mark the arrival of the first Africans to Virginia in 1619.

Four hundred years later, historians know little about the "20. and odd negroes" who arrived aboard the White Lion. They know their journey began in the port city and capital of modern-day Angola, Luanda, when they boarded the San Juan Bautista. Luanda was a slave trading hub.

In the Gulf of Mexico, the vessel was attacked by two English privateer ships, whose sailors confiscated 50 to 60 of the enslaved people. One of the ships sailed to Port Comfort, Virginia, now known as Fort Monroe in Hampton. The Africans were then sold to wealthy colonists.

Though much of the rich history of these men and women is lost, John K. Thornton, a professor of history and African American studies at Boston University, believes the homeland of the enslaved people suggests they were Catholics. Thornton presented his work at the George Washington Symposium at Mount Vernon in Alexandria Nov. 2.

Christians arrived in that part of Africa more than a century before 1619, when a fleet of Portuguese explorers made contact with the Kongolese people. Kongo was a kingdom located in west central Africa in present-day northern Angola.

The king of Kongo sent a group of ambassadors to Lisbon and at the end of visitors' three-year stay, they converted to Christianity. In 1491, the king of Kongo was baptized, too.

His son, King Alfonso I, totally embraced Catholicism. "Alfonso took the project of making his country a Christian country really seriously," said Thornton. The Portuguese sent missionary priests to administer the sacraments to the people. "One priest who came down said he thought Alfonso was an angel sent from heaven who knew the lives of the saints better than we ourselves knew," said Thornton.

The people also embraced Christianity in the Portuguese colony in Angola, he said.

"There was something about this Angolan region, not just the Portuguese colony but the surrounding region as well, that had an Afro-European blending (different) than anywhere else," said Thornton. Catholic missionaries also were present in the neighboring Kingdom of Ndongo to the south, but some there resented Catholicism as a sign of Portuguese domination.

Around the time the first slaves were brought to Virginia, there were two wars going on in that part of Africa, said Thornton. The larger of the two was between the people of Ndongo and the Portuguese and their allies. The Portuguese were the victors.

"They sacked the capital city, the king fled to an island in the river and (the Portuguese) hauled off a whole set of people. That governor exported 50,000 slaves in three years," said Thornton.

At the same time, Kongo had a civil war, and those defeated in that conflict may have been marched to Luanda and sold into slavery.

Thornton believes the group of Africans who arrived at Point Comfort probably included many Ndongolese people who might have been Catholic, and a few of the Kongolese people, who were Catholic. However, said Thornton, technically all of the enslaved people were baptized Catholic before their transatlantic journey.

"The Portuguese law required that all slaves to be exported were to receive a catechism and baptism before they got on the ship," he said. But the odds are that many already had been baptized and would have been sincerely Christian.

In 1628, even more Africans were brought to Virginia, most of whom Thornton suspects were Catholic Kongolese -- the defeated people in a conflict between a duke and the king of Kongo. The baptismal records in Dutch-controlled regions of the East Coast, known then as New Netherlands, also indicates the Christian faith of the enslaved Africans.

"In Dutch New York, where they're receiving people from exactly the same area in 1626, the fact that people were Christians was pretty clear because the baptismal records are full of Africans baptizing their children, all of them bearing surnames like Angola or Congo," said Thornton.

Thornton and his wife, fellow scholar Linda Heywood, believe that may explain the high rate of manumission, or freeing of slaves, in Virginia at that time, as some Englishmen felt it was immoral to hold a fellow Christian as a slave.

"Some of the masters (may have) decided, 'I think this person has been held for long enough, he is a Christian, I'm letting him go,'" said Thornton. Again, records from up north seem to support this theory. At one point, 11 Africans who had been held for 18 years petitioned for their freedom and the governor of New Netherlands agreed to let them go, said Thornton.

As much as Thornton would like to know more about the colony's earliest slaves, the historical record hasn't left much.

"We have almost no eyewitness testimony about the lives and personalities of this first generation of Africans. And nothing at all isn't much to work with," he said.

But it is clear that the first enslaved people in Virginia came from a largely Catholic part of Africa and they may have relied on their faith in God to withstand the difficult moments of their life in the New World.

It also may have been their earthly salvation, the reason they lived the last of their days as free women and men.

Maraist is a staff writer at the Arlington Catholic Herald, newspaper of the Diocese of Arlington. 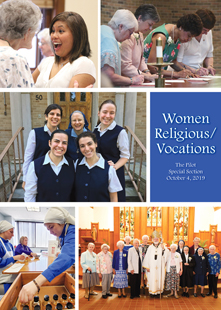