Afterward, Father Hehir made a prediction about a future pope, given the demographics of Catholic growth. "My guess is an African pope would not surprise me. And it would have a lot to support it."

He also praised Pope Francis for his interactions with President Donald Trump concerning immigration and the southern border wall.

In March, before his May 24 meeting with Trump, the pope warned that border-closing politicians "will become prisoners of the walls that they build." After his meeting with Trump, the pope attacked the president's policy of separating families at the border: "It falls into the greatest cruelty. To defend what? The territory, or the economy of the country, or who knows what?"

"I think this pope has handled the president of the United States very well. Very well," said Father Hehir, who also is secretary of health and social services for the Archdiocese of Boston. "He just will not take the bait to get into a shooting match with President Trump."

In his lecture, in talking about Vatican diplomacy during the Pius XII papacy, which spanned World War II, the pope was a supporter of the just-war doctrine, and once "said no Catholic could be a pacifist," Father Hehir said. "That wouldn't be said today, but it was said in his time."

By contrast, when St. John Paul took office in 1978, he encountered "the Cold War in full run." "He shaped a view of morality that then carried over into his diplomacy," he said.

Father Hehir singled out an address to the United Nations in October 1995, when the pope mentioned the rights of nations and the depravities of World War II:

The pope called national rights "nothing but 'human rights' fostered at the specific level of community life," adding: "A presupposition of a nation's rights is certainly its right to exist: Therefore no one -- neither a state nor another nation, nor an international organization -- is ever justified in asserting that an individual nation is not worthy of existence."

The are "things to think about today when we have illegitimate nationalism and unlimited patriotism," Father Hehir concluded.

The lecture was co-sponsored by Georgetown University's Office of the President. 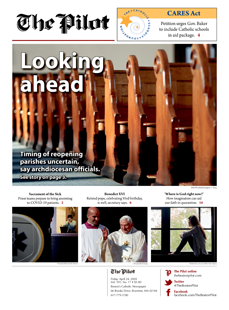