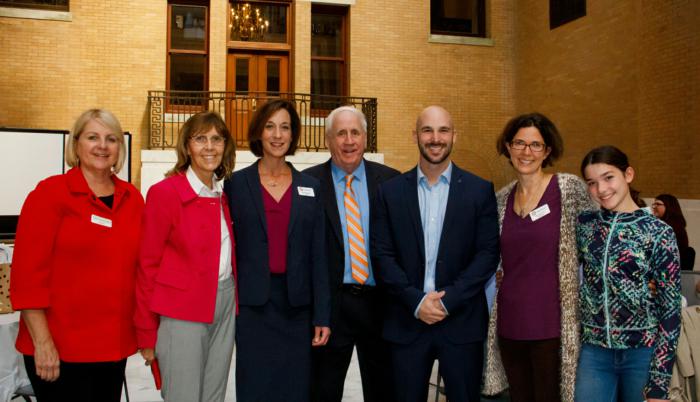 BEACON HILL -- Speakers from across the country, including an adult woman who survived her mother's abortion, joined local pro-life organizations for Massachusetts Citizens for Life's third annual Celebration of Life at the Statehouse on Oct. 30.

Under rows of city and town flags hanging from the walls of the Statehouse's Great Hall, representatives of pregnancy support organizations set up exhibitor tables along the perimeter of the hall. Attendees had opportunities to network before and after the speaking program.

Leaders of several pregnancy support centers shared remarks or videos about their work, including Mary McCarthy of Pregnancy Care Center in Haverhill, Teresa Larkin of Your Options Medical in Revere, and Joan Bailey of Friends of the Unborn in Quincy.

Multiple speakers asserted that the event's purpose was not only to celebrate life, but also to communicate to the legislators on Beacon Hill that their constituents do not support proposed pro-abortion legislation and that life-affirming resources are available.

A key topic that many speakers returned to was two proposed bills, House Bill 3320 and Senate Bill 1209, an Act to Remove Obstacles and Expand Abortion Access, together called the ROE Act, which would significantly deregulate abortion in Massachusetts.

The ROE Act would allow late-term abortions (after 24 weeks gestation) in cases of lethal fetal abnormalities, and allow such abortions to be performed outside of hospitals. Physicians would no longer be required to provide medical care to infants born alive during an attempted abortion, and would not face criminal penalties for failing to do so. The bill would also provide state funding for women who cannot afford to pay for an abortion, and eliminate the requirement that a minor must have parental or judicial consent to undergo an abortion.

Myrna Flynn, president of Massachusetts Citizens for Life, spoke about the We Can Do Better social media campaign that Massachusetts legislators launched earlier in the week to promote the ROE Act.

"There's one thing about the campaign that I agree with: we can do better. We must do better. But, legislators, if you happen to be hearing this right now, the ROE Act is not the way to serve your constituents," Flynn said.

She said that she has had many conversations with supporters of the ROE Act, including elected officials, who have not compared existing abortion law with the proposed legislation.

"Today, my message to all of you and to legislators or media who might be listening (is): read this bill," Flynn said.

She explained that the ROE Act replaces 10 sections of current abortion law with the same kind of "broad language" used in Roe v. Wade and Doe v. Bolton, the companion cases that legalized abortion nationwide. Flynn noted that even abortion rights supporters have said the decisions are flawed due to their broad terms, and she argued that this vagueness "leaves open the opportunity for all kinds of horrific scenarios."

She pointed out that the ROE Act would eliminate section 12P, which requires that life support be available in rooms where abortions are performed and that physicians work to save the lives of infants who survive abortion procedures. Under the ROE Act, an abortion survivor's medical care would not be guaranteed, meaning the baby could legally be left to die. Flynn noted that this issue is not usually addressed by abortion promoters, and that at that point babies are independent from their mothers.

"Saving the life of those independent humans cannot interfere with reproductive rights (because) the mothers' bodies are no longer involved. There is no longer any conflict between the right to life and the right to choose. There is only our moral obligation to protect every citizen of this commonwealth, especially those who would die without our help," Flynn said.

To illustrate the reality that unborn infants can survive abortion, Claire Culwell shared her story at the celebration.

Her birth mother had an abortion at the age of 13, not knowing that she was pregnant with twins. One was successfully aborted while the other, Culwell, survived, and she was not able to obtain a second abortion due to the risk of infection. Culwell was adopted and did not know about her twin or the circumstances of her birth until she met her birth mother 10 years ago.

"As she shared that with me, what spoke to me the loudest was not feeling sorry for myself in that moment. It was my birth mother's trembling hands and the tears streaming down her face as she shared about being pregnant at 13 and experiencing the trauma of abortion," Culwell said.

She described her reaction to reading legislation like the ROE Act and hearing that people do not want to provide medical care to abortion survivors or even acknowledge that babies survive abortions.

"When I hear things like that, when I see people celebrating a woman's right to choose, I think, What about me? What was my choice as a woman? What about my mother as a 13-year-old little girl who just needed someone to stand up for her? What about us? Do they not see us? Do they not see our pain and what abortion has done to us, to my twin, to hundreds of thousands of women across the country, to the over 300 abortion survivors that have been connected through the Abortion Survivors Network?" Culwell said.

She asked the attendees to stand for life and support their representatives and senators who affirm women.

Mike Seibel, an attorney from New Mexico, provided legal insight on what is likely to happen in Massachusetts if the ROE Act is passed, based on what has happened in New Mexico since the practice of late-term abortion began there about 10 years ago.

The ROE Act would allow late-term induction abortions to be performed in outpatient clinics rather than hospitals. This would mean women would not be afforded the same protections as they would in hospitals. Seibel noted that the leading causes of death related to pregnancy are blood clots, infection, and hemorrhage. Hospitals can provide prescreening for blood clots, have early warning systems for infections, and have surgical suites to care for hemorrhages.

Seibel shared the story of one of his clients, Keisha Atkins, who died at age 23 from a septic late-term abortion.

"On behalf of Tina Atkins, mother of Keisha, on behalf of the citizens of New Mexico, and on behalf of Keisha Atkins, who is no longer with us, we ask you to defeat the ROE Act," Seibel said.

Andrew Beckwith, president of the Massachusetts Family Institute, also shared some anecdotes about his work in the pro-life movement.

"When I grew up, I was told there are three things you don't discuss in polite company: sex, religion and politics. Abortion is the intersection of all three," Beckwith joked.

He said his first interaction with pro-life people was in law school, when a pro-choice group planned a celebration of the 30th anniversary of Roe v. Wade. Beckwith and about a dozen peers responded by making and wearing pro-life T-shirts on the anniversary. They were nervous about the reactions they would get, but to their surprise, people thanked them for wearing the shirts.

"What that taught me is that, as loud as the pro-abortion industry is, they don't represent as many of us as they would like us to think they do, and there are a lot of people out there that are hungering for the truth," Beckwith said.

Joe Langfeld, executive director of Human Life Alliance, spoke about pro-choice advocates' argument that abortion is, or ought to be, a decision made by a woman and her doctor.

In reality, a woman who goes to an abortion clinic might consult the doctor there for a few minutes before the procedure is performed, leaving the medical judgment to the abortionist rather than a woman's general practitioner.

Langfeld encouraged everyone to pray for the defeat of the ROE Act and, after the event, to go through the Statehouse and ask their legislators to reject the ROE Act.

Bill Gillmeister, executive director of Renew Massachusetts Coalition, shared news about his organization's online petition against the ROE Act and the Alliance to Stop the Taxpayer Funding of Abortion's ongoing efforts. The Alliance has been gathering signatures for a petition to amend the state constitution to end state funding of abortion. The Alliance would need to collect 100,000 signatures by Nov. 20, three weeks from the date of the Celebration of Life.