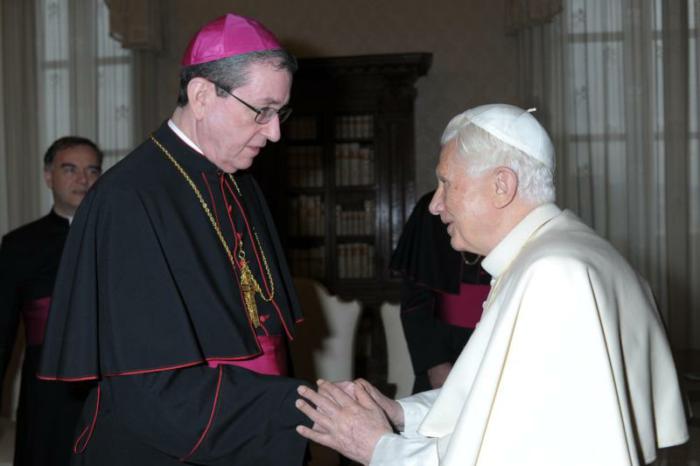 CLEVELAND (CNS) -- Bishop Richard G. Lennon, 72, whose time as the 10th bishop of Cleveland was marked by a commitment to evangelization with an emphasis on the Gospel, died Oct. 29 following a prolonged illness.

Bishop Nelson J. Perez of Cleveland recalled Bishop Lennon as a man with great love for the Catholic Church.

"In his service to the diocese, Bishop Lennon showed a deep dedication to the faithful governance of the diocese and a tremendous love of the church and the people he shepherded," Bishop Perez said in a statement. "May the Lord grant him eternal rest."

Bishop Lennon's wake will begin with afternoon vespers Nov. 4 in the Cathedral of St. John the Evangelist. Bishop Perez will be the presider and the homilist. The wake will continue until 7 p.m.

Bishop Lennon was installed in the Cleveland Diocese April 4, 2006, following the retirement of Bishop Anthony M. Pilla. He arrived at a time when the diocese was undergoing a reconfiguration that led to the closing of 50 parishes, mostly in inner city neighborhoods, and the realignment of ministries across eight counties of Northeast Ohio that saw 17 merged new parishes open in 2009 and 2010.

Members of 12 of the closed parishes appealed Bishop Lennon's decision to the Vatican. The Vatican's Congregation for Clergy overturned the closings of the parishes in 2012, saying the process outlined in canon law for shuttering a parish was not followed.

Prior to his appointment to Cleveland by Pope Benedict XVI, Bishop Lennon was an auxiliary bishop in the Archdiocese of Boston, where he served as apostolic administrator for seven months beginning in December 2002 in the aftermath of the clergy sexual abuse crisis that emerged earlier that year.

In Cleveland, Bishop Lennon quickly became widely known across the diocese as he visited each parish and school. He established an internal financial audit procedure for parishes and schools and his interest in faith education led him to introduce norms on models for Catholic schools and catechetics for children.

He also oversaw the Rooted in Faith capital campaign that resulted in $170 million being raised to strengthen parishes and Catholic schools, build the clergy retirement fund, boost evangelization efforts and support the Cathedral of St. John the Evangelist.

He served as a parish priest, fire department chaplain, assistant for canonical affairs and rector of St. John's Seminary prior to being appointed an auxiliary bishop by St. John Paul II in 2001.

In an Oct. 29 statement mourning Bishop Lennon's death, Boston Cardinal Sean P. O'Malley said: "As a priest and bishop in the Archdiocese of Boston, Bishop Lennon faithfully served the church through parish ministry, archdiocesan administration, leadership of St. John's Seminary and as apostolic administrator of the archdiocese.

"At all times, Bishop Lennon fulfilled his roles of service with confidence in the Lord and recognition of the importance of the work of the church, always focused on the needs of the people under his care."

Bishop Pilla said, "I pray for his peace and eternal repose. I am grateful for his dedicated service to this diocese and for all the good people who have given him such good care during his long illness."

Patrick Gareau, president and CEO of the diocese's Catholic Charities agency, said Bishop Lennon was always "totally supportive and willing to help spread our message to the parishes."

Gareau credited him with initiating the second appeal that has benefited Rose-Mary Center and its ministry to those with disabilities, increasing programs to address substance abuse and helping to fund disability services at Camp Christopher.

"I can't even measure what he meant to Catholic Charities," Gareau said.