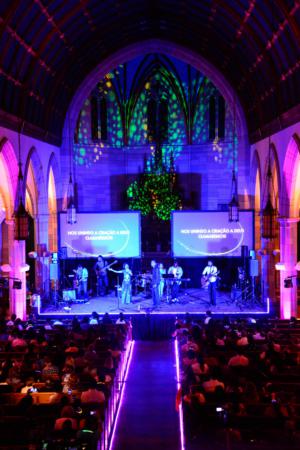 Musicians perform at the 2018 Build the Faith Music Festival. This year's festival will be held on Sept. 28 at St. Mary of the Annunciation Parish in Cambridge. Courtesy photo

CAMBRIDGE -- Build the Faith, a nonprofit dedicated to building churches in economically distressed areas, will host a Catholic music festival on Sept. 28 at St. Mary of the Annunciation Parish in Cambridge to raise funds for a church being built in Nicaragua.

Build the Faith was established by the family of Christina Dangond Lacouture in 2016. Christina had been diagnosed with a rare form of cancer in 2012 at the age of six. She was expected to live only a few weeks, but lived for another five and a half years.

Her family ran two Facebook pages, one in Spanish and one in English, asking people to pray for Christina. She shared weekly video messages with updates on her health and messages of love and encouragement. At the start of every treatment, Christina prayed, "Jesus, I trust in you."

"It was an amazing and beautiful faith that she had," Christina's mother, Monica Lacouture, told the Pilot in a Sept. 13 interview.

Rather than pray for her healing, Christina prayed that God would do whatever he wanted with her life.

"That's trusting God, with strong faith, knowing that whatever he was sending her way was what he wanted for her life. She knew that, and she understood that, and she lived it and enjoyed life to the point that she was thinking about others and how to bring others to the faith," Lacouture said.

Seeing how Christina's faith inspired others to grow closer to God, her family began holding prayer groups and retreats. They heard about a proposed church in their home country of Colombia that was in need of funding. They began making rosaries to sell in order to raise money for the project, and the people who followed Christina's prayer pages were interested in buying them. In 2016, Christina's family created Build the Faith, Inc. to keep up with the demand.

Christina died in January 2018 at age 11, but her family has continued her work through Build the Faith. The nonprofit organizes retreats in the Boston area and continues to fund building projects for economically distressed faith communities. They also hold teen workshops to share Christina's story and have participants make and sell rosaries as community service.

"It's a beautiful seed that she planted and we're continuing with it," Lacouture said.

Lacouture's spiritual director, Father Michael Harrington of St. Mary of the Annunciation Parish in Cambridge, had the idea to hold a music festival for youth and families in Christina's honor.

The event is sponsored by Build the Faith, the Holy Family Institute, and Jovenes de Santa Maria, the youth of St. Mary of the Annunciation Parish. About 400 people attended the first concert in 2018, which had the theme of trusting in Jesus. This year's concert will have the theme of saints.

"We want the young generation to understand that you are going to get crosses in life, but when you have God in your life, you see the rainbow in the middle of the cross, and you enjoy life the way that (Christina) did," Lacouture said.

Before the Sept. 28 concert begins, there will be a festival from 4:30 to 6 p.m. with food vendors, games, and activities for children. The concert will take place from 6 to 9 p.m. It will feature Jon Niven, the co-founder of LIFT Ministries, and two youth bands, English-speaking Higher Love and Spanish-speaking Katoli-k. Admission is $10 and will benefit Build the Faith's current project, building a church in Nicaragua that will serve a community of 2,000 people.

"The event is a wonderful opportunity for all people, especially families, to give honor and glory to God through music, personal testimonies, and family activities," Father Harrington said.