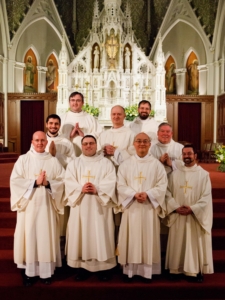 SOUTH END -- Nine men on their journey toward the priesthood received ordination to the diaconate at the hands of Cardinal Seán P. O'Malley, Jan. 18, as friends and supporters gathered to support the candidates at the Cathedral of the Holy Cross.

"It is a great joy for us to gather here for the ordination of nine new deacons on their way to priesthood. We are so grateful to their families, their communities, pastors, and all of those who have supported them and brought them to this day," the cardinal said.

The Archdiocese of Boston expects to ordain the new deacons to the priesthood at the cathedral on May 24.

"Jesus is our master, our teacher, but he has come to serve and not to be served -- as he tells us. The diaconate is a beautiful expression of Christ's servant-hood," Cardinal O'Malley said.

The word "deacon" comes from the Greek word "diakonos" meaning servant or minister. The first of three ranks of ordained ministry in the Church, deacons perform many services to the Church in conjunction with the ministries of priests and bishops. In parish life, deacons may preside at baptisms, weddings and rites of Christian burial, assist the priest at Mass, proclaim the Gospel and deliver homilies.

In his homily, the cardinal mentioned some of the men ordained by name for the significance of their journey toward the priesthood within the archdiocese.

The cardinal said the first deacons in the Acts of the Apostles indicate the need of the early Church to reach out to a diverse community. With two men ordained to serve ethnic and linguistic communities in the archdiocese at the cathedral that day, the cardinal noted the importance of that aspect of the diaconate and the role of the two men as future priests of the Archdiocese of Boston.

"Today, we are so pleased that in ordaining Steven Clemence we have ordained the man who will be the first Brazilian priest ordained for the Archdiocese of Boston, where we have about 200,000 Brazilians," he said.

"Also, Jiwon will be our second Korean priest ordained for the archdiocese, once again showing the catholicity of our Church and trying to meet the very real pastoral needs of God's people," the cardinal said.

He called the men to exercise the love of Christ in their work.

"Love for the poor and the suffering must characterize all ministry. When our people are most in need is when the presence of the deacon or the priest is most crucial," he said.

Following the Liturgy of the Word, the men were called forward and the cardinal elected them for holy orders to begin the rite of ordination to the order of deacon.

In response to questions from Cardinal O'Malley, each man promised respect and obedience to the archbishop and his successors, before he joined the others prostrate on the floor of the sanctuary while the congregation prayed the litany of saints.

As he imposed his hands on each man in silence, the cardinal then prayed the prayer of ordination and so completed their ordination to the transitional diaconate.

Cardinal O'Malley presented the deacons with the Book of the Gospels and instructed them to believe, teach and practice the Good News of Jesus Christ.

The rite of ordination concluded with the kiss of peace given by Cardinal O'Malley, followed by the bishops, priests and deacons present for the ordination.

Each man received the stole and dalmatic of his office, before the newly ordained ministered the Eucharist as deacons for the first time as the Mass continued.

After the Mass, Deacon Peter DeFazio noted the importance of support from friends, family and the faithful along the journey to the ordination.

Deacon George Fitzsimmons had a role model inside his family, since his mother is the cousin of Bishop Arthur Kennedy, the episcopal vicar for the new evangelization in the archdiocese.

"He definitely made the Church that much more real to me, though I was raised in a very Catholic home. He was always a very great example of the priesthood to me," the deacon said.

Family members also shared their support of the men at this waypoint on their journey into the ministry of the priesthood. Deacon Clemence's father commented on his son being on his way to becoming the first Brazilian priest of Boston, the second of his sons to pursue the priesthood.

"For us it is a blessing," Derek Clemence said.

Father Dominic Jung, CPPS, explained the significance for the Korean community in the archdiocese to anticipate the ordination of a new priest. He noted that leaving their home country as Koreans and living in the United States, the faithful gain a bulwark in their community.

"Through this vocation we get together in this different culture. We get stronger in faith," he said.

"People are happy with this vocation, we are always praying for him, and then trying to have another vocation," Father Jung said.