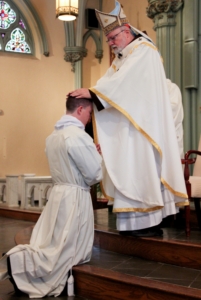 Cardinal O'Malley lays his hands on Deacon Eric Bennett, ordaining him a transitional deacon July 16 at St. Patrick Church in Natick. Deacon Bennett, who is home from studies at the North American College in Rome for the summer, is expected to be ordained to the priesthood in 2012. Pilot photo/ Justin Bell

NATICK -- Just three years ago, Eric Bennett would serve Mass and make Holy Hours at St. Patrick Parish in Natick while working as a physical therapist in the area. On July 16, a blazing summer day, he was ordained a transitional deacon there by Cardinal Seán P. O'Malley.

His parents Dudley and Kathleen Bennett, seven brothers and sisters and 20 nieces and nephews joined friends, parishioners and priests of the archdiocese, in witnessing the ordination rite which is the last major step before Bennett, 30, is ordained a priest next June.

"When I was watching the cardinal impose hands on Eric, I was thinking this is a great moment for him, but it's also a terrific moment for the future of the Church in Boston," said Father Brian Kiely, pastor of St. Patrick's speaking on one of the rituals of the ordination rite.

"It's always a great joy when a younger man comes along and is willing to embrace the call of Christ to serve in ministry and especially ordained ministry," he said.

Deacon Bennett is one of the archdiocese's seminarians who studies in Rome while staying at the Pontifical North American College. He studied for the last three years at the Gregorian University earning a bachelor's degree in sacred theology. He will return in the fall to begin a two year term at the Angelicum University for a licentiate in moral theology.

Father Kiely -- who also studied in Rome as a seminarian -- said a universal perspective of the Church is gained there, along with different approaches to ministry and evangelization.

In the Archdiocese of Boston, transitional deacons are traditionally ordained with their seminary class in late January or early February. However, seminarians studying in Rome are frequently ordained while they are home for the summer.

During the ordination Mass, Deacon Bennett received a rare gift: a personalized homily from Cardinal O'Malley.

"Eric, as a deacon, you must cast the wood into the waters of the bog and make the bitter, sweet. Your proclamation of the cross and resurrection of Jesus Christ will prepare people to receive the grace of the living waters of baptism," said the cardinal, referring to the first reading of the Mass in which Moses makes brackish water sweet for the wandering Israelites.

The Cardinal also exhorted Bennett to be a "master of prayer, sharing the fruits of your contemplation with those entrusted to your pastoral care."

"People expect us to be men of prayer. It is praying the word of God, in particularly the liturgy of the hours, that prepare us to be a servant of the word, so that you will be a messenger of God's good news, and preach that Gospel in season and out of season," said the cardinal.

The Cardinal also linked the diaconate to service. He said the word "servant" is not popular in society today and that Christ, as the suffering servant, is the example.

"It is to be that humble service that Jesus offers to those in need. It's not to make us feel good, to win friends or influence people, to impress others, or simply as a duty to be performed," said Cardinal O'Malley, instead that service is to be done with love and humility.

"It's a great challenge to serve the greatest master in the world, to follow in his footsteps, to implement his Gospel, to love and serve as he has," the cardinal also said.

Following the homily, the Rite of Ordination continued in which Deacon Bennett committed to a life of celibacy and promised obedience to Cardinal O'Malley.

Then Bennett lay prostrate before the altar while the Litany of the Saints was sung by the assembly.

Following the litany, Cardinal O'Malley laid his hands on Deacon Bennett, ordaining him.

Deacon Bennett was then vested with a stole and dalmatic, which are garments that signify the office of the diaconate and the role of the deacon during the Mass. He also received the book of the Gospels as a reminder to teach and practice the lessons of Christ.

After the exchange of peace, Deacon Bennett assisted at the altar and distributed communion to members of the congregation, including his family.

Following the Mass, Deacon Bennett greeted a long stream of supporters, including members of the St. Patrick's community who have supported the young man before and after his entrance into the seminary.

"Throughout these five years, they've continually supported me, just with their prayers and with just help that I've needed, they've really made me feel at home, my first parish home in the archdiocese," said Deacon Bennett.

Deacon Bennett described committing to the promises of ordination as a process already long underway.

For Bennett's mother, Kathleen, seeing her son lying prostrate reminded her of when he was two years old and would lie on the floor in fits of anger.

"Well he used to get upset and lie on the floor and I'm thinking 'Look at him at now' it's just like, a miracle," said Kathleen.